In ancient times Qigong was called Dao Yin Tu Na. Dao Yin is defined as directing the flow of Qi and Tu Na - breathing. Literally it means breathing exercise. A literal translation of the Chinese character for Qi is air or breath. It is the energy that circulates within the body. A famous Chinese text, The Classic of Difficulties states: 'Qi is the root of human being'. It is the creative and formative energy associated with life and all processes that characterize living entities.

The Chinese character for Gong means energy and time, work or self-discipline. Gong is the term used for any study or training which requires a lot of energy and time, work or self-discipline. Thus Qigong is the training or study dealing with Qi, which takes a long time and a lot of effort to master. It is a method to build up Qi. The most important factor in practicing Qigong exercise is perseverance, and the key is to master your mind. The aim of Qigong is to build our body's internal Qi and make it circulate regularly and strongly in order to be healthy. The old Chinese medical text The Medical Canon of the Huang Emperor, states: 'When one is completely free of wishes or ambition he will really get the genuine vital energy. When one concentrates his mind internally how can disease attack him?'

Qigong helps to restore vitality by making the body tranquil and allowing it to store energy. This creates conditions favourable for recovery of one's health. One benefit of Qigong is the ability to balance the capillary blood flow thus lowering blood pressure in hypertensive people. According to current research conducted in China, Qigong has the ability to reverse the growth and proliferation of cancerous cells. It also slows the ageing process, helps control weight, reverses the flow of sluggish livers, regenerates ovaries in post-menopausal women (indicated by rises in estradiol and testosterone levels), balances Yin and Yang, reduces estrogen levels in men and increases these levels in women. 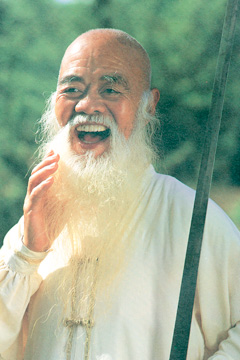 The human body is considered to be a large bioelectrical field, which radiates energy. Scientific research has proven that Qigong consists of a kind of corpuscular flow similar to the molecular flow of air - but different, in the respect that the corpuscles are both positively and negatively charged, infra red rays, magnetic waves, microwaves and infra-sonic waves. According to Traditional Chinese Medicine (TCM), this is interpreted as Qi being circulated and emitted by one's body after extensive Qigong training. This Qi has the ability to rearrange particles of living matter in the Lao Gong acupuncture point (located in the palm of the hand), improve blood circulation and remove obstructions from blood vessels, change the molecular structure of water, the genetic structure of DNA and RNA as well as altering the structure of cancer cells, which reduces their neoplastic character. During Qigong practice, the Qi is directed to the Dan Tian area, just below the umbilicus.

This Qi is called Yuan Qi and is stored in the kidneys. The main role of this Qi is to warm and promote the physiological functions of the Zang Fu (internal organs), the Jing Luo (meridians) and tissues of the body. The mental concentration of Qi into the Dan Tian area also initiates excitation in the nervous system of the lower abdomen promoting secretory functions of the organs. Prolonged and deep respiration strengthens the diaphragm and abdominal muscles, thereby increasing portal circulation and promoting systemic and pulmonary circulation. This increases our energy levels, strengthens the heart and improves our metabolism.

Qi is one of the fundamental substances which make up the human body. The others are Xue (blood), Jing (vital essence) and Body Fluids. The various Zang Fu (internal organs), Jing Luo (meridians) and tissues of the body rely upon these four substances for their nourishment and energy requirements to carry out their normal physiological functions. Qigong practice stimulates their adequate production within the body and also encourages their free and unobstructed flow. When Qi and other substances are built up in the body, they automatically travel along the route of the Jing Luo (meridians) to reach every part of the body including the diseased organs. This helps unblock the channels and regenerate the body's diseased organs.

Daily Qigong practice also helps us to balance and harmonise our emotions to the point where we can remain calm, centred and focused in our daily lives. According to the principles of Traditional Chinese Medicine:

Consequently, these excessive emotional responses which disrupt Qi movement in turn can bring about pathological changes in the functioning of the internal organs with which these emotions are directly correlated. The Yellow Emperor's, Canon of Internal Medicine, states: 'when the mind is quiescent and void, true Qi will be at your command. If one keeps a sound mind, his danger of disease will turn to safety'.

The theory of Jing Luo (meridians) is also closely related to each branch of TCM - acupuncture, herbal medicine, diet therapy, exercise therapy and tuina (massage). The effect that Qigong has on the meridians is believed by some to be the most important feature. Qigong has the ability to adjust the physiological balance by harmonizing the relationship between the surface of the body and the Zang Fu (internal organs). Zhang Zhong Jing, the famous physician of the Ming Dynasty, stated that 'Qi is the origin and base of the very changing worldâ€¦ human life always depend on Qi'. The Qi that is manifested by Qigong exercise is the vital Qi which is the force of power of human life. It resides in the acupuncture point Ming Men (gate of life) at the midpoint of the lower back. It tonifies the Yang energy of the whole body, building up one's energy levels and vitality. The amount of vital Qi generated an stored in Ming Men is enhanced through proper and correct Qigong practice.

Qigong can also be utilized as an adjunct to other facets of Traditional Chinese Medicine. If acupuncture or herbal treatment, for example, appear to be producing very slow therapeutic results, the addition of Qigong exercise can aid significantly in the recovery and personal well-being. Qigong is an effective method, but it is not enough to practice it alone because a proper balance between work, rest and diet regulation, within the Chinese medical framework, provides a stronger basis in order to maintain one's health.

Modern body building and physical exercise (aerobics, circuit training etc), at present, concentrates more on the muscles of the body rather than the mind, psychological, spiritual and mental state. Qigong, on the other hand, includes all these facets, and in developing them, enhances the body's ability to withstand the rigours of the natural environment. Today's lifestyle encourages constant and often frenetic activity. We are so consumed with overwork, over exercise, over-indulgence of alcohol and cigarettes and even too many late nights. This leads to the consumption of our Yang energy which eventually also burns out our Yin energy. The result of this may be muscle, joint, bone, heart or kidney problems. The key is to achieve balance between nurturing ourselves (yin) and our daily work (Yang). We need to live in harmony with our own body's rhythms and needs. Qigong helps us to re-establish the rhythmic swing of the Yin-Yang pendulum.

Qigong can be learnt by anyone, regardless of age, gender or health status. Its true profoundness becomes more evident with the longer one has been practicing. The significance of Qigong to one's life is limited only by the amount of time one spends in mastering this fine art.

I believe Qigong embraces life in the same way my favourite Taoist saying embraces the essence of life: 'Be still as a mountain, and flow like a river'.